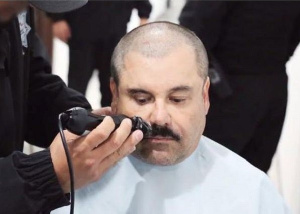 Clad in a beige uniform marked “3870,” the captured drug kingpin answered the Mexican prison guard’s questions calmly, barely looking up as he scrubbed black fingerprint ink from his hands.

The interview is part of a four-year-old video released this week which appears to offer rare footage of notorious Mexican drug lord Joaquin Guzman, who is now under lock and key for life at a top-security U.S. prison.

Obtained by news site Latinus, the seven-minute video and accompanying photos show Mexican law enforcement registering a man matching the appearance of Guzman at the Altiplano prison in 2016. (bit.ly/38CLgza.

The man in the images has the same haircut, features and build as Guzman on the day of his arrest, and his prison clothes and haircut match later images of the gangster behind bars.

Guzman’s arrest followed two earlier escapes – one via a mile-long tunnel from the same jail – that had humiliated the Mexican government.

It was not immediately clear how Latinus obtained the video, or why it surfaced now. Mexico’s security ministry did not respond to a request for comment on its authenticity, which Reuters was unable to independently confirm.

Juan Pablo Badillo, a lawyer for Guzman in Mexico since 2014, said his impression was that the video appeared in line with the facts of what happened that day.

Guzman was extradited in 2017 to the United States, where he was convicted of trafficking tons of cocaine, heroin and other drugs as leader of the Sinaloa Cartel.

After escorting Guzman inside Altiplano, guards searched him and shaved his thick mustache and mop of black hair, according to the photos obtained by Latinus.

And his wife’s name?

“The one I’m married to is Alejandrina Salazar,” he answered, head bowed as he worked to clean the ink from his hands. “But the one I live with is Emma Coronel.”

The feared criminal whose nickname means “Shorty” in English proceeded to sign a document, tugging at his uniform to check the inmate number emblazoned across his chest.

The footage of Guzman, who grew marijuana as a boy in Sinaloa state, shows his hands dotted with freckles and liver spots.

Guards searched Guzman again before leading him to a bleak cell outfitted with a gray cement bench. They handed him a puffy jacket, a thin mattress and two rolls of toilet paper before locking the door. 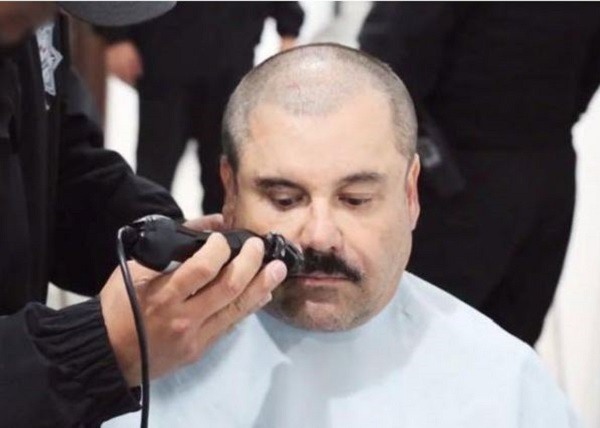